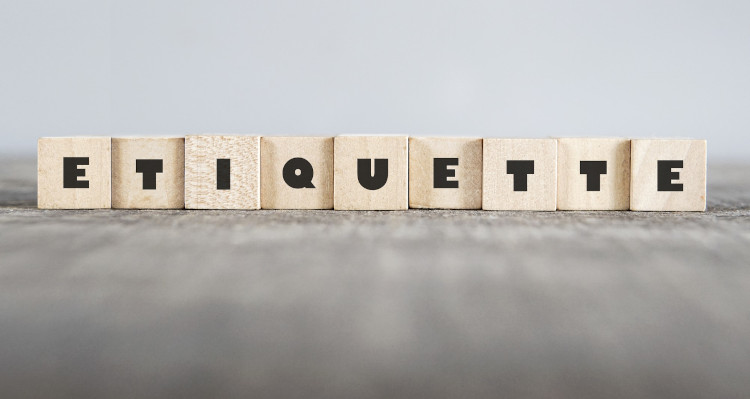 Etiquette is defined as the customary code of polite behaviour in society or among members of a particular organisation or group. As a fully developed language used by people who conform to well-established societal codes of conduct, the English language embodies fixed ways of expressing etiquette, courtesy and congratulatory messages, which are deserving of mastery by anyone who craves proficiency in the most prestigious language across the globe.

Having considered this, let us begin with the commonest error of showing etiquette among Nigerians: this is the expression, ‘I stand to be corrected’. Although the foregoing is often innocuously used to say that one is open to correction, the general user of English should note that this openness to correction should be appropriately expressed as, ‘Correct me if I’m wrong’. Subsequently, if one finds the correction acceptable, the onus is on one to say, ‘I stand corrected’. It is, therefore, essential to utterly desist from the use of the expression, ‘I stand to be corrected’ if you place a premium on linguistic best practices.

Moving on, when acknowledging appreciation, the inclusion of the pronoun, ‘it’, is sacrosanct in the expression, ‘Don’t mention it’. This is because the expression is an idiom: a linguistic convention in the English language, which is not open to the minutest alteration in standard usage. Everyone who gives primacy to his or her communicative competency should, thus, refrain from omitting the pronoun, ‘it’, as commonly heard among Nigerians.

On top of all that, the shout given in unison by a group of people, to honour a person or celebrate something, is called ‘three cheers’, and the three cheers are HIP, HIP, HOORAY! The four cheers which have become customary in Nigeria, culminating with our rhythmic ‘Hip, hip, hip, hooray’, is alien to the native speakers of English. And when my beloved Nigerians say to me: ‘Dr GAB, leave our “hip, hip, hip” for us’, I cheerfully reply: ‘If you ever find yourself among the native speakers, remember to dispense with your third “hip”’. Emphatically, the language of etiquette is kept on the front burner, thanks to the question, ‘Do you mind?’ This, funnily enough, has deprived many Nigerians of the privilege of sumptuous meals and refreshing drinks. Contrary to the assumption of many individuals, the question ‘Do you mind?’ attracts the negative response, NO, if you wish to accept the offer. Expectedly, therefore, it will take the positive response, YES, if you decline the offer. This rationalisation is well illustrated below.

Jimoh: Do you mind a cup of coffee?

In the light of this revelation, I presume that you will not miss any other appetising offer going forward. Equally, in the regular manner of asking questions, ‘please’ is used with the affirmative response, ‘yes’, while ‘thanks’ is used with the rejection, ‘no’, to show politeness, as substantiated below.

Gani: Do you care for a cup of coffee?

Fascinatingly, one common way of responding to the greeting ‘How do you do?’ in standard English is to equally say, ‘How do you do?’ particularly when you are conversing with the person for the first time. Well, of course, you can avoid the use of this interrogative salutation or give whatever answer you consider contextually appropriate. But when you get such a response from someone else, I hope you will not say, ‘Why are you repeating my question?’