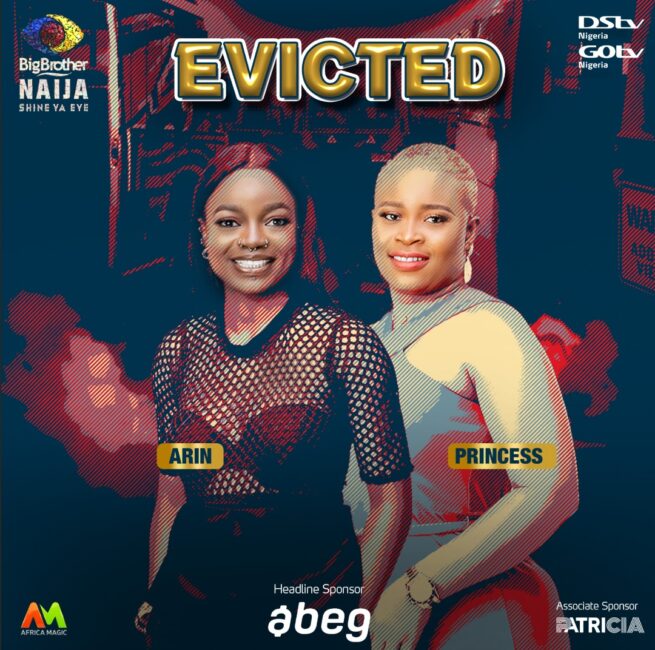 Arin and Princess have been evicted from the BBNaija Shine Ya Eye House during the second Sunday live eviction show of the season. Last Monday, the housemates nominated Emmanuel, Nini, Tega, Saga, Arin and Princess for possible eviction. The Head of House (HoH), Pere, chose to save Saga and replace him with Saskay, placing her on the chopping block too. After an intense week of arguments, kitchen drama, a military-like regime, and extreme parties, the week finally concluded with two evictions.

Show’s host, Ebuka Obi-Uchendu, first announced that Saskay was safe this week before evicting Arin from the house. Arin’s eviction left Nini and Peace in tears as they were losing a member of their clique. But, Arin left on a high note, telling Ebuka that everything that has happened in the house, including her eviction, is positive.

Answering the ‘what next question’, Arin said,

“Definitely releasing a collection from my brand, Nola Black. And then, a bunch of art shows. I think I’m going to be having a bunch of collaborations and just life. I write, do costume design; there’s just going to be a bunch of stuff.”

Next, Ebuka eased the tension by saying Emmanuel, Nini, and Tega were safe. He then asked Princess to leave the house as she had been evicted. Princess immediately walked out, trying to avoid any heavy emotions, but not before she said her last words.

Taking a bow, she told the housemates,

“I love you guys! And by the way, my real crush in the house is not Whitemoney; it’s Cross. I love you, Cross!”

She later explained on stage to Ebuka that she was happy despite her eviction because she finally got to live her dream and experience Biggie’s house. She also said she looks forward to continuing the hustle.

Abeg is the headline sponsor of Big Brother Naija season 6, and the associate sponsor is Patricia.