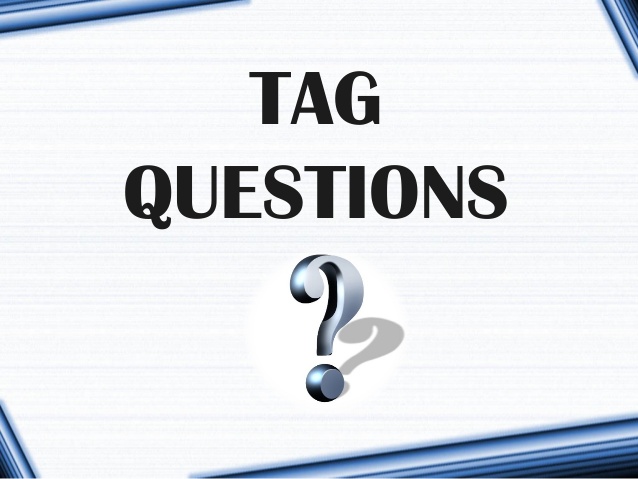 Native speakers of English are supposed models to second-language users such as Nigerians. This is, however, not always so, especially at the level of consummate grammar.

Consequentially, the utterances of some native speakers are occasionally characterised by informality that negates the precepts of standard English. One of such situations of informal language is the tag formation. For instance, many a British person uses the tag question, ‘innit’, for virtually all statements, whereas the formation of tag questions is rule-governed. Assuredly, this essay borders on the rules guiding the construction of tag questions.

First things first, a tag question is a short question that is attached to a statement for clarification. Fundamentally, a statement in the positive form attracts a negative tag, while a negative declaration admits a positive tag. Besides, it bears affirming that a sentence is adjudged negative when it encapsulates negators such as ‘no’, ‘not’ and ‘never’.

3. Kunle does the laundry on a weekly basis, doesn’t he? (correct).

4. The governor didn’t promise to implement the policy soon, did he? (correct)

5. They shall depart for London tomorrow, shan’t they? (correct)
You must have observed that the aforesaid example sentences contain auxiliary verbs (is, was, does, didn’t and shall). This begs the salient question: how do we form a tag when a sentence portrays only main/lexical verbs — not auxiliary verbs? For proper perspective, it will sound utterly ridiculous to say:

6. Bimbo buys groceries at weekends, buysn’t she? (incorrect)
Thus, in such a circumstance, suffice it to deploy the tags ‘do’, ‘does’ or ‘did’ as and when appropriate. While ‘do’ is used in the present tense, alongside plural nouns or pronouns, ‘does’ is equally in the present tense and deployed together with singular nouns or pronouns. By comparison, ‘did’ is applied in the past tense, regardless of if the noun or pronoun is singular or plural. These generate sentences like:
7. She sings every morning, doesn’t she? (correct)

8. We play football every day, don’t we? (correct)

10. Tina always caters for the toddlers, doesn’t she? (correct)
In furtherance of that, the verbs, ‘has’ and ‘need’, deserve special attention in tag formation. ‘Has’ forms the tag when it precedes another verb; it attracts do, does or did when it is the lone verb; and it accepts an auxiliary verb when it is preceded by an auxiliary verb. These positions are explicitly exemplified below:
11. Kunle has got a car, hasn’t he? (correct)

14. Kunle does not have a car, does he? (correct)
The foregoing instances are quite similar to ‘need’, which can likewise precede another verb, be used alone or succeed a helping verb. It forms the tag when it precedes another verb; it attracts has, have or had when used alone; and it takes the auxiliary verb as a tag when it follows the auxiliary verb. These viewpoints are illustrated in the accompanying sentences:
15. They need to arrive early, needn’t they? (correct)

17. They will need a substantial sum for their upkeep, won’t they? (correct)
On top of that, ‘I am’ usually accepts the question tag ‘aren’t I’, while ‘used to’ admits the tag question ‘didn’t’, as evidenced below:
18. I am Shina’s bosom friend, aren’t I? (correct)

19. Mustapha used to travel to the Philippines, didn’t he? (correct)
Next, be informed that when a sentence is comprised of two or more parts, the last part determines the tag:
20. I came, but I didn’t eat, did I? (correct).

21. Denis has yet to meet my father, but he liaises with my mother, doesn’t he? (correct)
Moreover, when sentences encompass the demonstrative pronouns, ‘this’ and ‘that’, the pronoun used in the tags is ‘it’. In the case of ‘these’ and ‘those’, the pronoun applied in the tags is ‘they’.
22. Those are Peter’s houses, aren’t those? (incorrect)
Those are Peter’s houses, aren’t they? (correct)

25. These are not Musa’s teachings, are they? (correct)
Interestingly, any sentence that involves ‘let’, takes ‘shall’ in the tag question.
26. Let us begin the rehearsal, shall we? (correct)
In regard to sentences that embrace indefinite pronouns like ‘somebody’, ‘everybody’ and ‘nobody’, plural auxiliary verbs and pronouns are used in the succeeding tag questions.
27. Everybody is currently engaged, aren’t they? (correct)

28. Somebody has not consumed the delicacy, have they? (correct)
Last but not least, it is important to affirm that the positive marker, yes, should not be accorded to a negative response:
29. Aren’t you eating with me? Yes, I’m not eating (incorrect).
Aren’t you eating with me? No, I’m not eating (correct).
In conclusion, like every other endeavour, fluency demands a great deal of mastery. As such, anyone who desires an enviable command of the English language must be committed to mastering its intricacies.
© 2020 Ganiu Abisoye Bamgbose (Dr GAB)