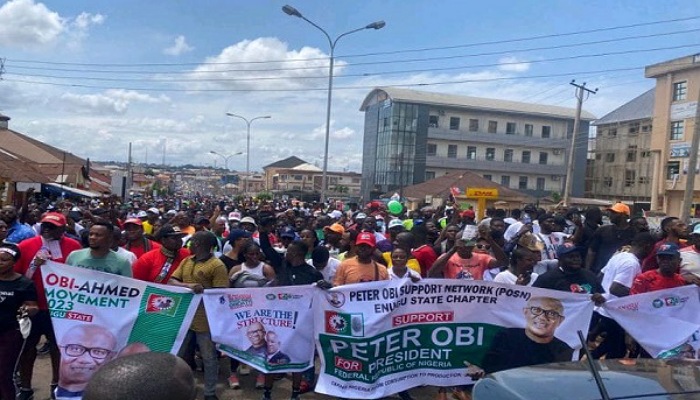 Peter Obi’s Labour Party and its supporters, known as OBIdients have been ordered through a court injunction not to centralise their rally at the Lekki Toll Gate on October 1st rally.

BrandNewsDay reports that Justice Daniel Osiagor of the Federal High Court, Lagos division has ordered the Labour Party and the supporters of Peter Obi not to converge at the Lekki Toll Gate for the #Obidatti23 Forward ever rally scheduled to take place on October 1 in Lagos.

The judge gave the order on Wednesday while ruling on a motion for injunction brought before it by 10 plaintiffs seeking to restrain the Labour Party and its supporters from holding the rally pending the hearing and determination of the suit.

The judge also ordered the Lagos State Police commissioner and the inspector general of police to ensure that the order is complied with.

The plaintiffs who are mostly lawyers, in their motion on notice argued that holding the rally might lead to the breakdown of law and order in Lagos State.

They contended that “A repeat or celebration of the “infamous” EndSARS protest of 2020 under the political guise of “#Obidatti23 Forward Ever Rally” will cause a breakdown of peace and will result in post-traumatic stress disorder for them and the public.

Consequently, they sought an injunction to stop the rally from holding by praying the court to restrain Mr Obi and his party, as well as their supporters from further planning and promoting the rally.

How the court ruled

Ruling on the motion for an injunction, the court restrained the LP, Peter Obi, Yusuf Datti Baba-Ahmed and their loyalists from converging at the Lekki toll gate to hold the rally.

The court then adjourned the hearing of the substantive suit to November 4.