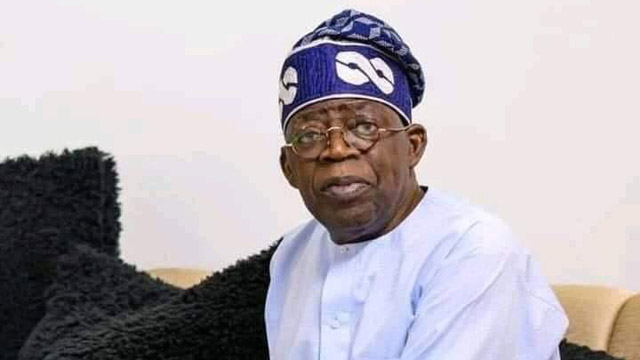 The Centre for Reform and Public Advocacy, a civil society organization, has vowed to file a lawsuit challenging Senator Bola Tinubu‘s ability to run in the 2023 presidential election on behalf of the All Progressive Congress, the party in power.

BrandNewsDay reports that the group also handed the Inspector General of Police, Alkali Baba Usman, a 48-hour deadline to begin a probe into the claim that the APC flagbearer provided false information about his educational background through its legal adviser, Mr Kalu Agu.

The group told newsmen in Abuja on Saturday that it had already forwarded its petition to the relevant police authorities and that, should the IGP fail to form a team to look into the claim, it would not hesitate to ask the Abuja Division of the Federal High Court for an order of mandamus against him.

It stated that additional research was required into a report the Lagos State House of Assembly released regarding a petition that late Chief Gani Fawehinmi, SAN, a leading lawyer and social activist, had earlier submitted to dispute Tinubu’s educational credentials.

According to the CSO, the APC gubernatorial candidate may be ineligible to contest the impending presidential election for allegedly supplying false information to INEC and for alleged perjury.

“On the 29th day of December 1999, at the Ikeja High Court, Lagos State, Senator Bola Ahmed Tinubu swore to an affidavit wherein he deposed that he attended the University of Chicago from 1972-1976 and Chicago State University from 1977-1979 and obtained Bachelor of Science Degree in Economics, qualified as a certified public accountant.

“On the 28th day of December 1999, at Ikeja High Court, Lagos state, Senator BAT swore to an affidavit attached to INEC Form CF 001 which Senator Bola Ahmed Tinubu submitted, wherein he deposed that he attended;

“This matter was once reported to you and the Lagos State House of Assembly constituted an ad-hoc Committee on Tuesday, September 21, 1999, to investigate the allegations of Perjury and Forgery levelled against the Executive Governor of Lagos State”, the petition read in part.

BrandNewsDay Nigeria also confirmed that the group said the Lagos State Ad-hoc Committee, in its report, stated that Tinubu had in his evidence, admitted full responsibility for “needless errors” being pinpointed “in recent publications and which formed the basis of the allegations against him”.

It, therefore, urged the IGP to investigate whether or not the APC candidate attended all the schools he claimed in the form he submitted to INEC.

Meanwhile, among vital documents attached to the petition delivered to the IGP and acknowledged by his office, are the forms submitted to INEC by Tinubu in 1999 and 2022 for verification.

Below is Tinubu’s Affidavit obtained by Brandnewsday: 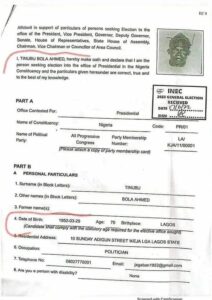