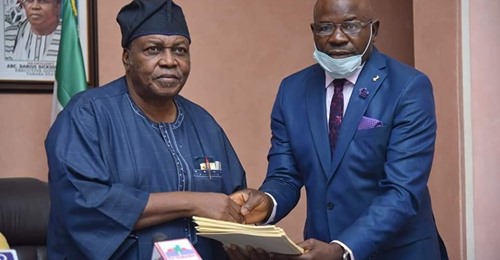 This online news platform understands that this was carried out at a short but impressive ceremony at the Taraba State Government House in Abuja.

Speaking at the event, the governor said with the passage of the budget, the state government is ready to hit the ground running with its implementation.

Ishaku commended members of the state House of Assembly for passing the budget without delay and noted that with this development “the yearly norm of signing annual and provisional warrants for Government services to subsist at a level not exceeding the level of those services prevailing in the previous financial year, pending the passage of the appropriation Bill, will no longer be an issue.

He assured that the government would be strict in expenditure control to ensure efficiency in spending and accountability.

”To achieve such control, mechanisms for effective monitoring of ministries, departments and agencies will be strictly enforced,” he said.

Details of the Bill as approved by the assembly showed that the state will be spending 141, 625,435,961.80 (One Forty-One billion, Six Hundred and Twenty-Five Million, Four Hundred and Thirty-five Thousand, Nine Hundred and Sixty-one Naira, Eighty Kobo.

He thanked members of the assembly for working hard to pass the budget in record time and assured the people of the state that the government was determined to deliver greater dividends of democracy.

Speaker of the Taraba State House of Assembly, Dr Joseph Albasu Kunini said with the presentation of the Budget Bill for signing today, the House had kept its promise made on December 4, 2020, when it was presented to the House to expedite action in its consideration.

He observed that the final figure had increased by about 2.1 billion Naira but noted that the new figures were realistic.