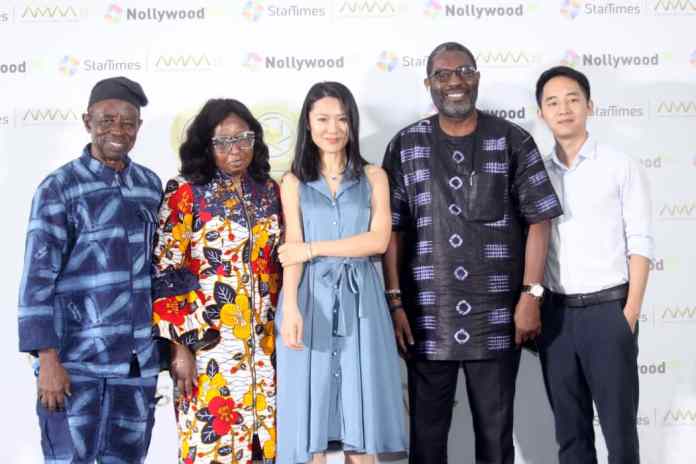 BrandNewsDay Nigeria reports that the Shorts came to a close on Friday as StarTimes, in partnership with The Africa Movie Academy Awards (AMAA), rewarded outstanding short filmmakers across Africa.

According to the organisers, the StarTimes-AMAA Short Film Festival, also called The Shorts, was organised to motivate young and promising filmmakers on the African continent by providing a bigger platform for talented young people to succeed.

The Filmmakers, critics, and movie enthusiasts gathered to appraise the future of the African movie industry and concluded that the African film is on the rise as the young generations are now taking the stage.

Edmond Tawale from Uganda emerged winner of the special prize for a documentary with the movie titled Ateker. Edmond got prize money of $1000. The outstanding short film winners are Frank Abasiekong from Nigeria as 2nd runner-up for his short film titled Room 10; Frank Dzikonu from Ghana as 1st runner-up for his animation movie titled Sad Story of Kojo; while Enobong Nkanta from Nigeria emerged as the winner for his short film titled Mama’s Song. The 2nd runner-up got $1000, the 1st runner-up got $2000 and a mobile phone; while the winner got $3000 and a laptop.

Speaking at the Award ceremony, Peace Anyiam-Osigwe, Founder of AMAA said “I’m delighted with this initiative to reward our young filmmaker and happy with the synergy StarTimes is having with the movie industry. Filmmakers need to understand the process of filmmaking. We approached StarTimes for partnership and StarTimes is willing to help us nurture these resourceful people.

“Over 500 entries were submitted while about 220 short films were selected for the screening. This shows the number of young people making marks across Africa.

“We have to clear the stage for young and upcoming filmmakers. If we catch them young and structure them properly, it will help the growth of having better films being made along the way.”

“The shortlisted films are still airing on ST Nollywood Plus on StarTimes and StarTimes-ON mobile app. If you have the opportunity, please watch them, so you will know what the young people are doing. There are a lot of topics that resonate with our daily lives. There are also little animations embedded too. So, I was quite impressed with what I saw,” Ms. Peace added.

Also speaking, the CEO of StarTimes, Alex Jian said, “We are here to award excellence, creativity, hard work, and originality. It’s our goal to provide a bigger platform for talented young people to succeed on their dream roads.

“StarTimes has been deeply engaged with Nollywood since last year, starting with the production of Ile Alayo Season 1, a great work directed by our friend and ambassador Femi Adebayo. During the process, we noticed the great potential of the whole industry, and we are surprised by many young content creators. They are passionate, hardworking, and full of inspiration.

“As a Pay-TV platform rooted in Africa, StarTimes aims at providing the best content to its audience. And we are very willing to support content creators in all kinds of ways because when they grow, the industry grows; if they succeed, we succeed.

“AMAA is devoted to encouraging movie industry development, and now we are joining hands to support new faces. We are honoured to work with AMAA on this beautiful cause, while we keep bringing fresh new content to the StarTimes audience,” Alex said.

Tunde Kelani gave a keynote address adding that “African film is on the rise. And the young generations are taking the stage. The collaboration between StarTimes and AMAA will inspire and encourage young African filmmakers to make and grow African cinema and animation movies. Finally, we are getting the tools and talents to produce animation.”

Making a case for the growth of short films, Femi Adebayo said, “Short films are needed. There is a growing number of inpatient audience who wants to quickly grab the nitty-gritty of the story. Thanks to AMAA for the synergy with StarTimes. I want to call on other content providers to do more short films, especially short films that address social issues so that even those in the corridors of power can grab the message within a short span of watching.”