Edo 2020: Obaseki, Ize-Iyamu Embrace Each Other Ahead Of 14th Sept
Advertisement 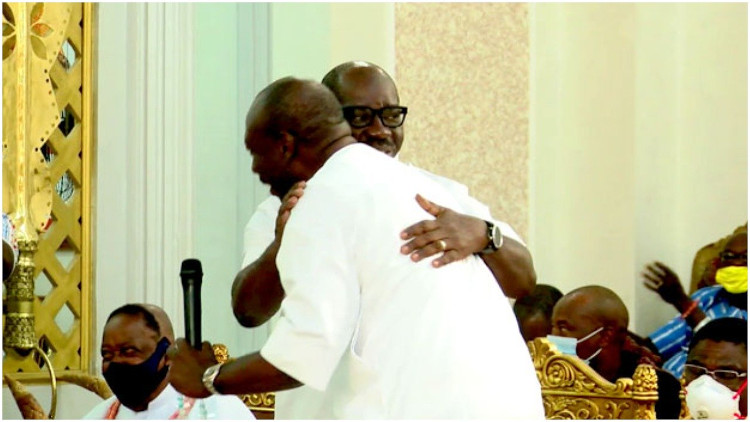 Governor of Edo State, Godwin Obaseki and his main contender, Pastor Osagie Ize-Iyamu, Wednesday, embraced each other ahead of the forthcoming election in the state.

Brandnewsday reports that the Oba of Benin, Ewuare II, took a giant leap to put an end to the trend of violence that have marred campaigns rallies in the State, with the series of attacks and counter-attacks.

The meeting in the Palace of Oba of Benin on Wednesday was borne out of weeks of heated tension in the state by the activities of the two leading political parties in the All Progressives Congress (APC), and the ruling Peoples Democratic Party (PDP).

The peace meeting had the presence of various leaders of the PDP and the APC at the Oba of Benin’s palace. Personalities in attendance are:

The immediate past Governor of the State, Comrade Adams Oshiomhole, his predecessor, John Oyegun, the PDP candidate, Obaseki, the APC flagbearer, Ize-Iyamu, and the State Deputy Governor, Philip Shaibu, among other political actors, were the notable faces at the meeting.

Obaseki and his main challenger, Ize-Iyamu went before the monarch to pay homage shortly after all the attendees were seated.

Edo 2020: Obaseki, Ize-Iyamu Embrace Each Other Ahead Of 14th Sept

The revered monarch urged all political actors in the State to sheath their swords and demanded words of assurance that peace would be maintained before, during, and after the election.

The monarch asked the political office seekers to emulate former President Goodluck Jonathan who conceded defeat to President Muhammadu Buhari in the 2015 general elections even before the results were announced.

“To me, they (the political actors in Edo) are all one family, and what cannot be resolved when you are all family?

Reacting to the development, the duo vowed to the Crown that they would make peace reign their watchword going forward.

“I want to assure you, Your Majesty, that in my role as the Chief Security Officer of the state, I am doing all I can, all within my possible best to maintain peace and safety in Edo State,” Obaseki told the Oba of Benin.

Meanwhile, on the other side, Ize-Iyamu state that “Every campaign we do henceforth, we are going to spend some time to also talk to all of them (party supporters) about the need to keep to the peace, no matter what provocation they might talk about”.

As a corollary, the two major party contenders, Obaseki and Ize-Iyamu hug each other to indicate a sign of peace, therefore, sending forth a message to their supporters to steer clear from violence.