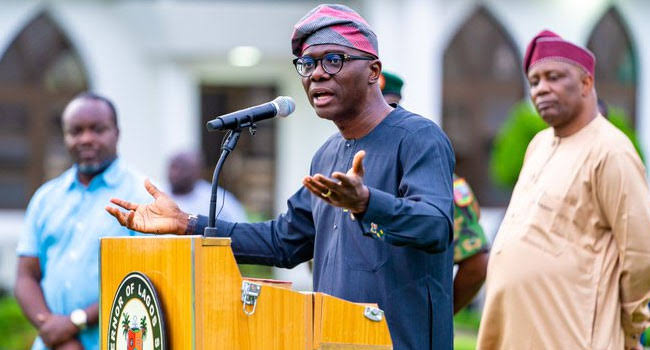 Lagos state government has disclosed that some businesses will remain closed during the COVID-19, despite the gradual easing of the lockdown in the state.

President Muhammad Buhari in a nationwide broadcast on Monday declared that there will be a partial easing of lockdown in Abuja, Lagos and Ogun States starting from the 4th of May. While Kano State will remains on a total lockdown.

Brandnewsday gathered that the Lagos state government in a press briefing on Wednesday, Governor Babajide Sanwo-Olu revealed that some businesses will remain closed for another two weeks, as the ease of the lockdown begins next Monday until contrary directives are given.

Sanwo-Olu who further disclosed that his administration will set an implementation committee that will enforce all of these directives. Added that it will include the federal government directives on overnight curfew and ban on interstate passenger movement.

The List of Lagos State Government businesses ban for COVID-19

Below are some of the businesses to be affected by this announcement:

As spelt out in the governor’s address, businesses such as event centres, cinemas, arcades, bars and casinos will remain locked for another two weeks, until another review is done by the state government.
Also included in this group are day clubs and night clubs, beaches, viewing centres, swimming pools, gyms and all recreation and relaxation centres.

The reason for this decision is the tendency of these businesses to attract people in large numbers, often beyond 50, thus contravening the physical distancing directive.

Beauty salons, Spas, barbershops, and public parks, are also by this directive, prohibited from opening their businesses for two weeks, from May 4.

This cuts across all of these businesses, including those located in residential and private estates.

According to the governor, these businesses “will continue to remain closed for another two weeks in the instance; at which point we will review and advise on the permissible opening date for these establishments.

In addition to other directives, the state government also suspended all operations of motorcycles, popularly known as okadas, on all routes in the state.

The only exceptions to this rule are those used for courier and logistics purposes.

“Commercial Motorcycles, popularly known as Okadas, are to suspend their operations statewide, except for those motorcycles used for courier and logistics purposes” Sanwo-Olu explained.

Tricycles are allowed to operate only in the areas designated for their operations but are not allowed to carry more than two passengers on any trip, ensuring that appropriate distance is maintained between the passengers.

FG directives will also be upheld

In addition to the state directives, declarations made by President Muhammadu Buhari on the Monday nationwide broadcast will also be upheld.

The president had in his address, authorised the state governments to come up with a specific framework as to how the gradual easing of the lockdown would be done in their states, based on the peculiarities of the situation.