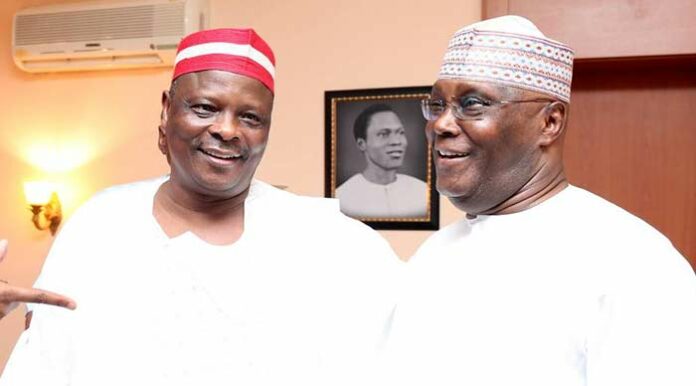 Kwankwaso’s NNPP Merged Force With PDP, Declares Support For Atiku, details can be accessed below.

This online news platform understands that the decision is coming less than a week after the presidential candidate of the New Nigerian People Party (NNPP), Rabiu Musa Kwankwaso visited Bauchi State.

The decamped members, at the Nigeria Union of Journalists (NUJ) secretariat yesterday, in Bauchi, declared their support for the PDP presidential candidate, Alhaji Atiku Abubakar.

Liman said he believed in Atiku’s capacity to salvage the country from its present hardship and dwindling economy considering his antecedents as a former vice president for eight years.

NNPP has been dismantled by the Atiku wave in Northern Nigeria 😂. pic.twitter.com/CjufEsHBfU

Liman’s words read in parts, “I am here at the Nigeria Union of Journalists (NUJ) Bauchi State branch to inform the press and the general public that today, I Babayo Liman, have resigned my appointments as National Zonal Secretary, member of the presidential campaign council, coordinator of Kwankwasiyya and membership from the party.

“I am here with some of my executive members and thousands of supporters to declare our intention to join the Peoples Democratic Party (PDP) and to support the candidacy of Alhaji Atiku Abubakar as president of Nigeria and Bala Mohammed as governor of Bauchi State, respectively.

Meanwhile, BrandNewsDay Nigeria reports that this is coming at a time Kwankwaso reassured his supporters while speaking at Chatham House, London, the United Kingdom, that he would not resign for anyone, despite having previously intended to collaborate with the Labour party to realize his dream of ruling Nigeria.

“What I told them is what I will tell you. If anybody wants Kwankwaso to withdraw, bring criteria and select the best. Anytime I have a better candidate, I am ready to talk to him,” he said.

Boasting over 30 years of experience in the civil service, the NNPP presidential candidate claimed that his party is growing in Nigeria, describing the LP’s media buzz as a bubble.