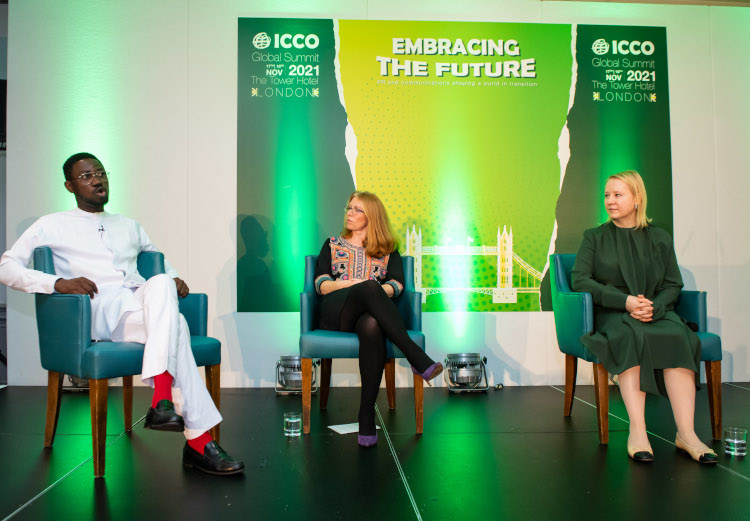 As elected leaders in different parts of the world are putting measures in place to silence critical citizens and media platforms, Ayeni Adekunle, the CEO of BlackHouse Media (BHM), has said tech firms and the government have a huge role to play in ensuring this does not become the norm.

This was his submission when he addressed Public Relations professionals from over 30 countries at the International Communications Consultancy Organisation (ICCO) Global Summit in London on Wednesday, November 17, 2021.

The World Press Freedom Index 2021, compiled by Reporters Without Borders which evaluates Press Freedom in 180 countries, shows that the press is completely blocked in 73 countries and restricted in 59 others.

In the report, Nigeria, where Ayeni was a journalist before starting his PR consultancy in 2006, falls under the countries categorized as “problematic environments for press freedom”.

The gagging of the media is not subsiding as it is increasingly gaining ground in more countries with the enactment of sanctions and legislation disguised as policies aimed at curbing misinformation.

In June 2021, the Nigerian government suspended the operations of Twitter in the country over claims that it undermined its democracy and was being used by citizens to promote violence.

Citing the Nigerian example, Ayeni said, “To ensure that we are able to speak freely, the government and big tech have a strong role to play and that responsibility must meet with that of individual citizens and organisations if we have to make the world better.”

Responding to a question on how individuals can freely express themselves with tech tools and also able to identify trustworthy information, Ayeni said individuals must hold themselves to higher standards in their interactions to ensure the propagation of truthful information, but “I put that within the context of the role government and society have to play.”

He said, “In Nigeria where the quality of education is not comparable to England, I cannot entirely put the burden of the responsibility on just the individuals because they’ve not been trained in a way that prepares them to understand misinformation. So individuals have roles to play, but that role will succeed or fail depending on how much government and society play its role.”

Ayeni was joined on the session, titled ‘Freedom of Speech and Free Media’, by Patrick Penninckx, the Head of Information Society at Council of Europe, Jodie Ginsberg, the CEO of Internews Europe and Elena Fadeeva, the CEO and Founder of FleishmanHillard Vanguard and Sally Lehrman, Founder of The Trust Project.

He also challenged PR professionals across the world to take their place as thought leaders, not only in communication but also in aspects that matter, and use their ‘big influence’ on both government and society to compel them to act better.

“As PR people, everything we’ve preached at BHM since 2014 is that PR owns a very strong responsibility in making people and companies do better. It seems the world wants to use PR only for the tactical aspect. Everybody thinks it’s media relations and publicity. No! The kind of ethics that guide PR, the foundation upon which PR was built, needs to be mainstreamed in such a way that every board member, executive, minister, and government understand and they are playing their roles like they’ve signed up and endorsed those principles because were those the principles driving big tech we will not be having this kind of discussion.”