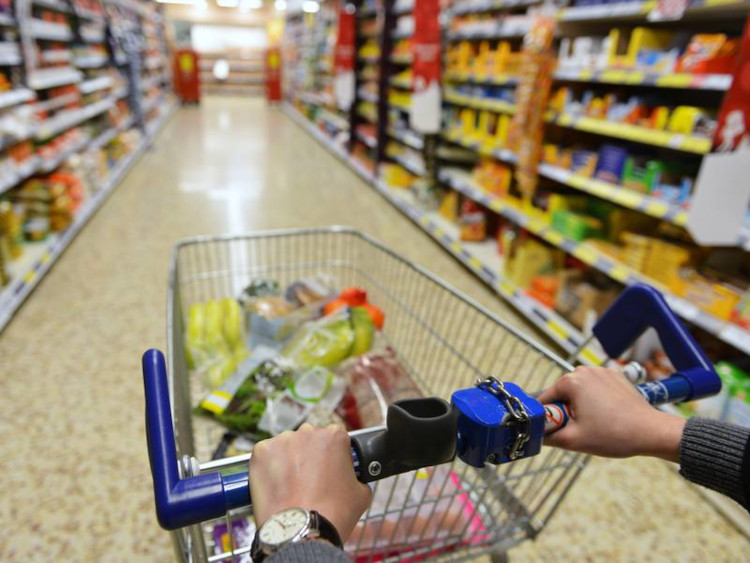 The leading cryptocurrency by market value, Bitcoin is trading 3% lower on the day at $44,500, having dropped 11% last week. That was the biggest single-week percentage decline since May.

According to Coinbase Institutional, bitcoin’s immediate bullish outlook has weakened, courtesy of last week’s slide, and the cryptocurrency could consolidate between $44,000 and $48,000 for the time being.

Some chart experts fear a deeper drop as the price structure now looks similar to the one observed after bitcoin’s double-digit slide in the second half of April. 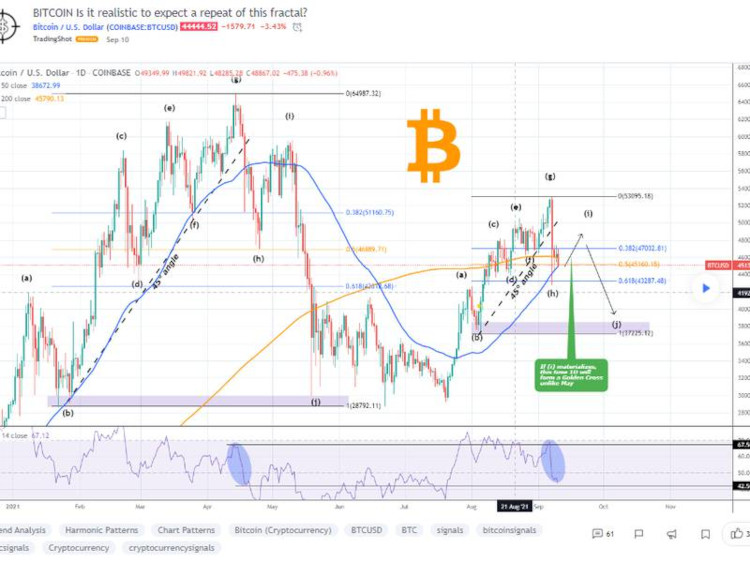 An extended sell-off could materialize if the U.S. consumer price index (CPI) figure for August, scheduled for release at 18:00 UTC on Tuesday, prints above 5% annualized. That could speed up the Federal Reserve’s plans to begin scaling back its liquidity-boosting asset purchases.

Bitcoin’s mid-May slide from $58,000 to $30,000 happened after official data released on May 12 showed the U.S. CPI at a three-year high and triggered taper fears. The sell-off also coincided with China’s crackdown on cryptocurrencies and concerns regarding the negative environmental impact of cryptocurrency mining.

“Inflation remains the key as usual – specifically when base effects will end & CPI prints begin to reflect the true year-on-year picture for the Fed,” QCP Capital said in its Telegram channel. “Arguably, the worst of the base effects have now run its course [as seen in the chart below]. If inflation still remains above 5% from here, the hawks will surely start expressing worry.” 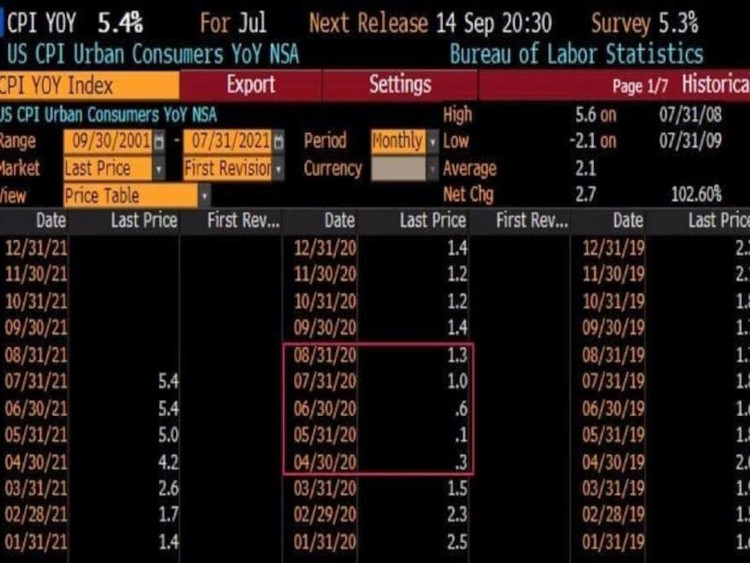 U.S. CPI: Worse of the base effects look to have run their course. Source: Bloomberg, QCP Capital

Several Fed members have already turned hawkish, signalling a willingness to begin scaling back asset purchases, or tapering, this year. Some observers are concerned that a possible taper would lead to a substantial drop in the dollar liquidity in the fourth quarter, and could coincide with the U.S. Treasury issuing more bonds to rebuild its coffers (the Treasury General Account, or TGA) after the debt ceiling is lifted.

According to the Wall Street Journal, the U.S. government could run out of cash and hit the debt ceiling between mid-October and mid-November. The Fed is expected to begin tapering around the same time.

“The U.S. Treasury will likely quickly rebuild the cash balance after a debt ceiling suspension as the new ‘equilibrium level’ of the TGA seems to be around USD 800bn. This is a net liquidity withdrawal of almost USD 600bn compared to the current scenario, which cannot be seen as good news for risk appetite,” analysts at Nordea Bank said in the weekly research note published on Friday. 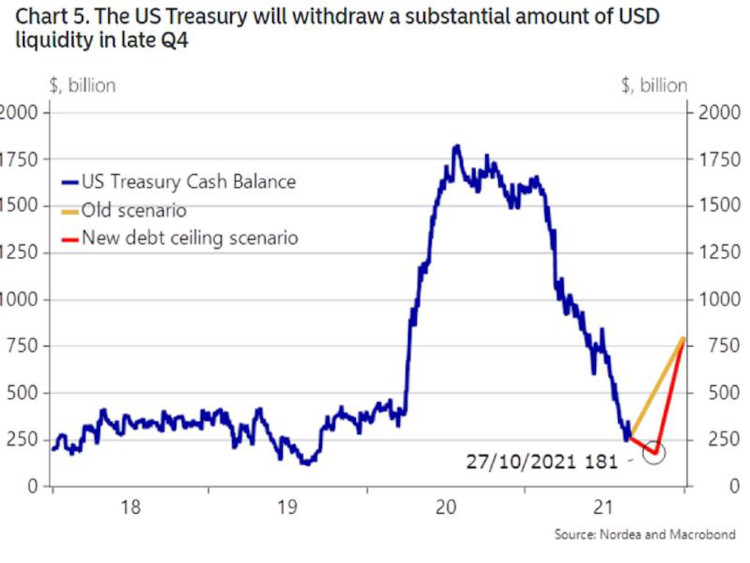 Bitcoin and other traditional market risk assets have soared in the past 18 months, thanks to the liquidity deluge brought on by the Fed’s stimulus program, and so a liquidity squeeze due to a Fed taper and U.S. Treasury actions could weigh on asset prices in general, and especially on bitcoin because capital in crypto markets is mercenary and tends to overreact, according to Messari’s Mira Christanto.

Top investment banks foresee market risk aversion strengthening in the weeks ahead. According to the Australian Finance Review, Morgan Stanley expects U.S. stocks to decline by as much as 15% by year’s end, while Bank of America foresees a 6% drop.

A stock-market decline could add to bearish pressures around bitcoin. “The world still sees bitcoin as a risk-on asset,” Charles Edwards, founder of Capriole Investments, tweeted. “Almost every bitcoin correction in 2021 has correlated with an S&P500 correction of -2% or more.” The S&P 500 fell by 1.69% last week alongside bitcoin’s 11% decline.