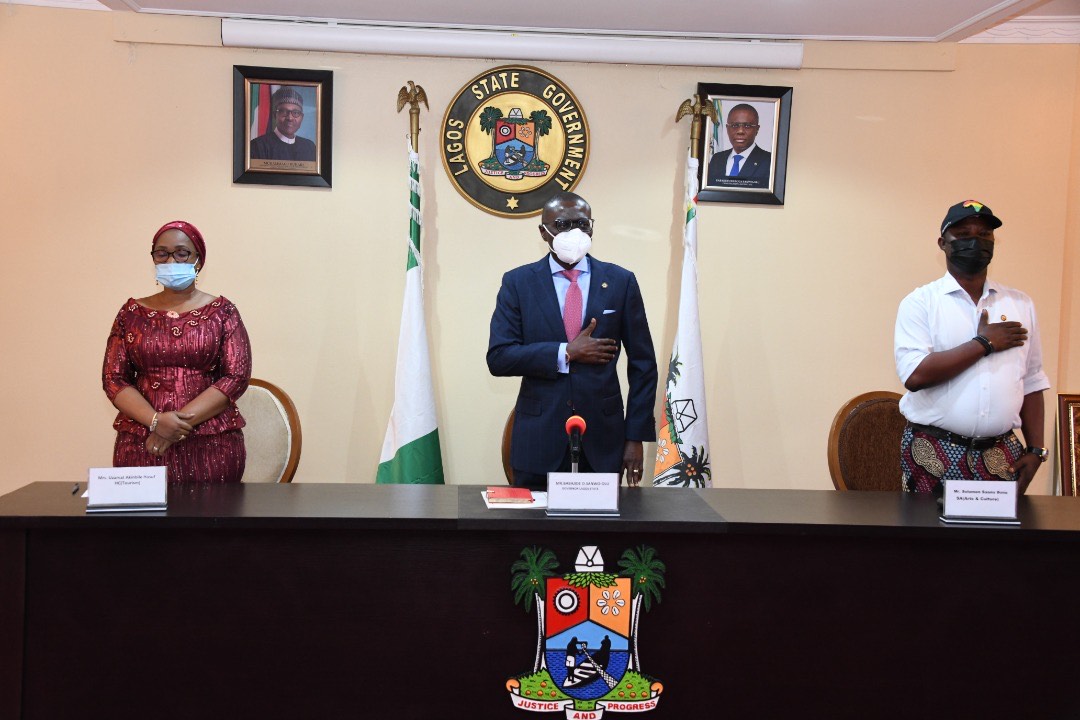 Lagos State Governor, Mr. Babajide Sanwo-Olu initiated an intervention project that will jump-start the transformation of the Entertainment and Tourism sector.

The Governor, on Wednesday, inaugurated the Committee on Film Production Empowerment at the State House, Marina to fund youth creativity and entertainment activities in the State, following the disruption caused by the spread of Coronavirus (COVID-19) that impacted negatively on entertainment and tourism in the State.

Richard Mofe-Damijo – a veteran filmmaker and Nollywood actor – is the chairman of the nine-member committee, comprising five industry practitioners and four Government officials. They are selected to drive the Governor’s vision to actively support youth creativity and entrepreneurship in the sector.

The committee’s inauguration came months after the Governor set aside N1 billion seed capital to unlock the potential in hospitality and tourism businesses.

The scheme is to support the creative ideas of movie and entertainment producers who are constrained by funds to bring their concepts into reality. Applicants are to be supported with funding based on the financial plans of their projects. The grant may be as much as N40 million for each beneficiary.

Entertainment and Tourism form a key pillar of the Government’s T.H.E.M.E.S. Agenda being implemented to drive inclusive growth and socio-economic development across sectors of the State’s economy.

Sanwo-Olu described entertainment and tourism as enablers of growth with huge potential for employment opportunities. The sector, he said, is critical to achieving his administration’s youth development objectives, given its high rate of absorption of creative young people in its supply chains.

He said: “This is a signpost of all pockets of intervention we have created for the development of creativity and tourism sector. Aside from the N1 billion set aside for the hospitality industry, this scheme is specifically targeted at our movie industry which is known all over the world. This is with the belief that we can further raise the status of our creative output and commercialise the returns to a level it can compete with Hollywood and Bollywood.

“We realised most of our film production experts and directors face a lot of funding impediments. We are intervening to close this gap and bring credible veterans who have the knowledge and have demonstrated capacity in the industry to drive this project. That is why we carefully selected five key practitioners in the industry to lead. The Committee will be supported by four Government officials to limit bureaucracy for the Committee to achieve its objectives.”

The Governor made it known that the scheme sought to leverage idea and talent development to transform Nollywood into a brand that would compete favourably with advanced film industries, such as America’s Hollywood and India’s Bollywood.

Sanwo-Olu said the committee had been given the authority to disburse the support grants to movie producers who have fresh ideas and those whose stories are yet to be completed.

He charged the committee to work out its engagement modalities and administrative responsibility of selecting the beneficiaries of the scheme.

He said: “As we roll out this scheme, we want to be able to help the industry around job creation and bring youths out of unemployment, using the creative industry. We also want to create entrepreneurs that will use their creativity to enhance the market shares of the sector.

“We want to support industry practitioners to raise capacity, support development of local content and discourage the action of taking proceeds from the industry out of the country, thereby denying local practitioners the benefits of their talents. We will not restrict your (committee’s) ability; we will give you leeway to do your job.”

Sanwo-Olu said the intervention would galvanise the private sector into committing more funding to the industry for accelerated growth. He expressed optimism that the scheme would unlock the potential of the Lagos coastline and turn it into a destination of choice in African tourism.

Commissioner for Tourism, Mrs. Uzamat Akinbile-Yussuf, said the committee members would set the conditions for accessing this fund, determine the eligibility of applicants and decide on the amount that could be given to an individual applicant or group at a particular time.

She said: “This intervention will make Lagos State to continue to retain its position as the hub of film making in Nigeria and as a city for the creative minds.”

Mofe-Damijo described the committee’s appointment as “a big honour”, describing members as passionate practitioners in the Entertainment industry.

“We don’t have any excuse not to perform in this assignment. We will do everything in our capacity to ensure that result which the Governor has envisioned comes to reality,” he said.

Facebook Comments
READ >>  The Battle Gets Tougher as Nine Contestants Scale Through to Next Round of Nigerian Idol, Proudly Sponsored by Bigi Drinks