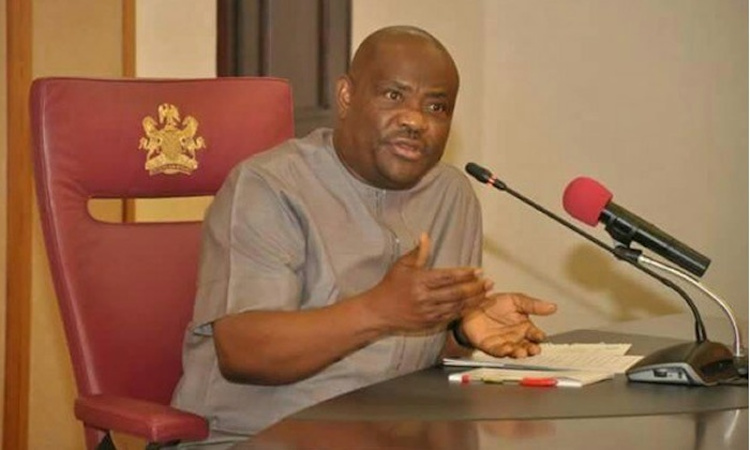 Biafra Nations League (BNL), has whipped with words, the Rivers State Governor, Nyesom Wike, labelling him as ‘a confused person,’ who does not know his roots.

Brandnewsday gathers that the Biafran group made this known on Saturday, in a statement signed by the Deputy National Leader of BNL and Head of Operations, BBS Media, Ebuta Akor Takon, adding that Governor Wike a talkative and lacks focus.

The group also claimed as false, Wike’s claims that the Indigenous People of Biafra (IPOB), was trying to rename the State.

BNL accused Wike of trying to create ethnic tension in the State, adding that the Governor who denied being Igbo does not know the history of Rivers State and Niger Delta as a region.

The group pointed out that it was not possible for any group to rename a town if the indigenes of such town are not involved.

“The Governor does not have a tribe and acts like a confused person,” the group said, insisting that the “Niger Delta region of today includes Imo and Abia and they joined region same day Edo, Ondo, Cross River and the Akwa Ibom States were included.

“We were never part of Niger Delta, it is an Ijaw region by geographical definition, it was Obasanjo that created this confusion when he added other areas as part of the region.

“If Wike said he has found a new ethnic group, and that he is not from Igbo because they told him that Ikwere is from Benin, it’s fine.

“But then, he shouldn’t forget that Late Oba of Benin rejected the claim, saying that the Benin Kingdom does not have any record showing that Ikwere migrated from Benin. They do not speak a related language or practice the same culture.

“So you can see he doesn’t know anything, and he is a Governor. He merely relied on what some of the elders in Rivers State told him, and these were the same elders that looted Igbo property during the war.

“Being a Niger Delta does not call for ethnic denial, everyone in Nigeria knows Wike is an Igbo man who is ignorant of that, he also does not know the meaning of his names. A full-fledged man like him does not know his ethnicity, it’s a shame.”

BNL added that Governor Wike has no other agenda in his state other than talking about the activities of the Pro Biafra groups.