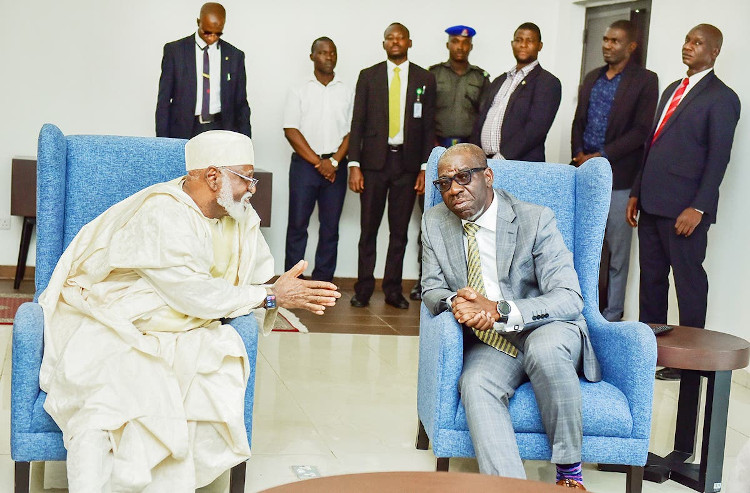 The Chairman of the National Peace Committee, Rt. Gen. Abdulsalami Abubakar has disclosed that members of his committee stormed Edo State to ensure that the September 19 governorship election is conducted harmoniously.

Brandnewsday reports that Gen. Abubakar made this known on Monday in Benin City while addressing candidate of the Peoples Democratic Party (PDP) who doubled as the governor of the state, Governor Godwin Obaseki, ahead of the peace pact by all political parties to participate in the elections.

The former head of state explained that the political temperature in the state has been high in some areas for some time, and the peace committee decided to assist in calming tensions because if there’s no peace, there cannot be any elections.

“So, your excellency, this is why we are here in Benin together with members of the peace committee and Bishop of Sokoto Catholic Diocese, Bishop Matthew Kukah is here,” Abubakar said.

“Like I wrote to you in my letter from the peace committee, tomorrow the signing of the peace pact will take place at 2 pm between you, other candidates and their chairmen.

“As you know the purpose of this committee is to ensure that all those involved in this election get hold of their supporters and party people to ensure that there’s peace in the State,” he added.

In his remarks, Governor Obaseki welcomed Abubakar, a former Head of State, saying that his good work across the world, where he had been seeking peace across trouble zones, spoke for him.

Obaseki said, “We just finished the stakeholders meeting with the Independent National Electoral Commission Chairman, Prof. Mahmood Yakubu, and the Inspector-General of Police, Mr Mohammed Adamu, where they informed us about the significance of signing this peace pact.

“We’re committed to ourselves, our monarch, Oba Ewuare II, and our people to do all within our powers to maintain peace.

“We’re also going to applaud and support you to ensure that we take responsibility to ensure there is peace in this election.”