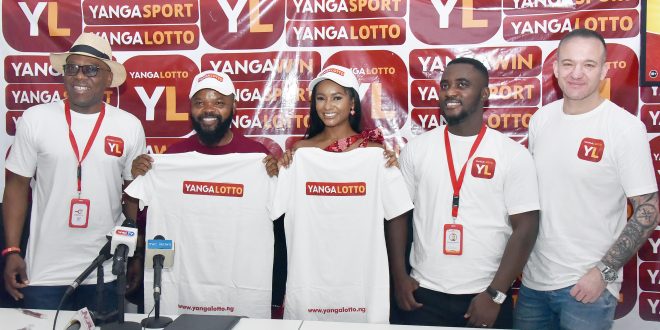 YangaGames Technologies Limited, operators of many sub-brands YangaSport, YangaWin and the soon-to-be-launched YangaLotto has unveiled top fast-rising influencers Nedu and SimiDrey as Brand Ambassadors in a series of activities leading up to the official launch of their new disruptive mobile friendly lotto platform, YangaLotto.

BrandNewDay reports that the Brand Ambassadors Nedu and SimiDrey were unveiled at the ceremony held in Lagos on Wednesday 11th January 2023.

Speaking at the event, the Executive Chairman Yanga Games Technologies Mr Derrick David Kentebe said “We are so excited to present to the Gaming Public Nedu and SimiDrey as brand Ambassadors of Yanga today  Wednesday, 11th January 2023 in our  Lekki Office, Lagos.

The duo was chosen due to their persona which resonates with the brand identity as a fun, youthful, vibrant, trendy, entertaining, playful platform built for youths above 18 and especially interested in the female segment.”

He further stated “We picked these two influential personalities due to their mass appeal, huge following and brand values in the mass market as well as the social media community. We have selected these two influencers whom our target audience can easily identify with as we look forward to a mutually beneficial relationship with all our market segments.”

Nedu, a multi-talented award-winning comic character and a household name and face across the radio and TV media platforms said “I’m enthused to be found worthy to be crowned Mr. Yanga, a crown I would bear jealously while ensuring the brand benefits from all media assets. All my followers and fans must do Yanga from now on. Na our turn to do Yanga be dis… if you no Sabi do Yanga, go learn am o” quipped the ever-funny act who is loved by over 3 million Nigerians on Instagram.

On her own part, SimiDrey, award-winning actor, and TV and radio presenter disclosed that he is excited with the prospect of the brand affinity and the mutually beneficial outcomes envisaged. In her words; “I have been a friend of the Yanga house for quite a while and this gesture births a new era for the brand which I am proud to be part of”.

Meanwhile, as part of the YangaLotto pre-launch events, YangaGames Technologies held a Yanga Theme Song Challenge which received many entries with the first prize of N500,000. The winners were announced on the YangaLotto TikTok and Instagram pages and were presented with their prizes during the unveiling ceremony.

The company in her magnanimity decided to extend the rewards to the 10th position, gifting the 1st runner up with N150,000 prize money; the 2nd runner up with N100,000 cash prize while the 4th to 10th positions received N10,000 each for their effort. This according to Mr. Derrick David Kentebe, the Executive Chairman of YangaGames Technologies Limited is to show the brand’s affection for entertainment.

According to the company’s Chief Marketing Officer, Mr. Clement Okolie, the YangaLotto platform which will be launched in a few days boasts of inherent unique and disruptive features and market approach chief amongst which are the following game-changers: the OgaYanga Lottery features reduced lottery numbers range of 1-90 (90 numbers) to 0-9 (10 numbers), which implies better chances of winning.

He said, “the platform gas over 18 hours staking window per game. This will enable punters to stake multiple times on a particular game.”

Speaking on the credibility of results, Okolie stated that the lotto games are based on American Lottery results hence the company has no chance of manipulating winning numbers. On the Friday Cashback feature, every YangaLotto customer will receive 10% of their lost stakes every Friday.”

“YangaLotto has a downloadable app, YangaLotto app that is accessible for download on the Google play store, YangaLotto customers can share their numbers with friends and family, while many desirable items like bone straight hair, iPhones, Samsung phones, laptops, TV, Generators and other home equipment which will be raffled for N100 tickets with multiple entries allowed for those who may want to increase their chances of winning,” the chief marketing director added.

In conclusion, the Yanga Jackpot will feature daily and weekly cash jackpots for YangaLotto customers at N100 per ticket with multiple entries permissible and an enticing affiliate program that will create thousands of young adults the opportunity to earn monthly income has also been activated. Nigerians are in for exciting times ahead in 2023. This is their year to Do Yanga”, he said.