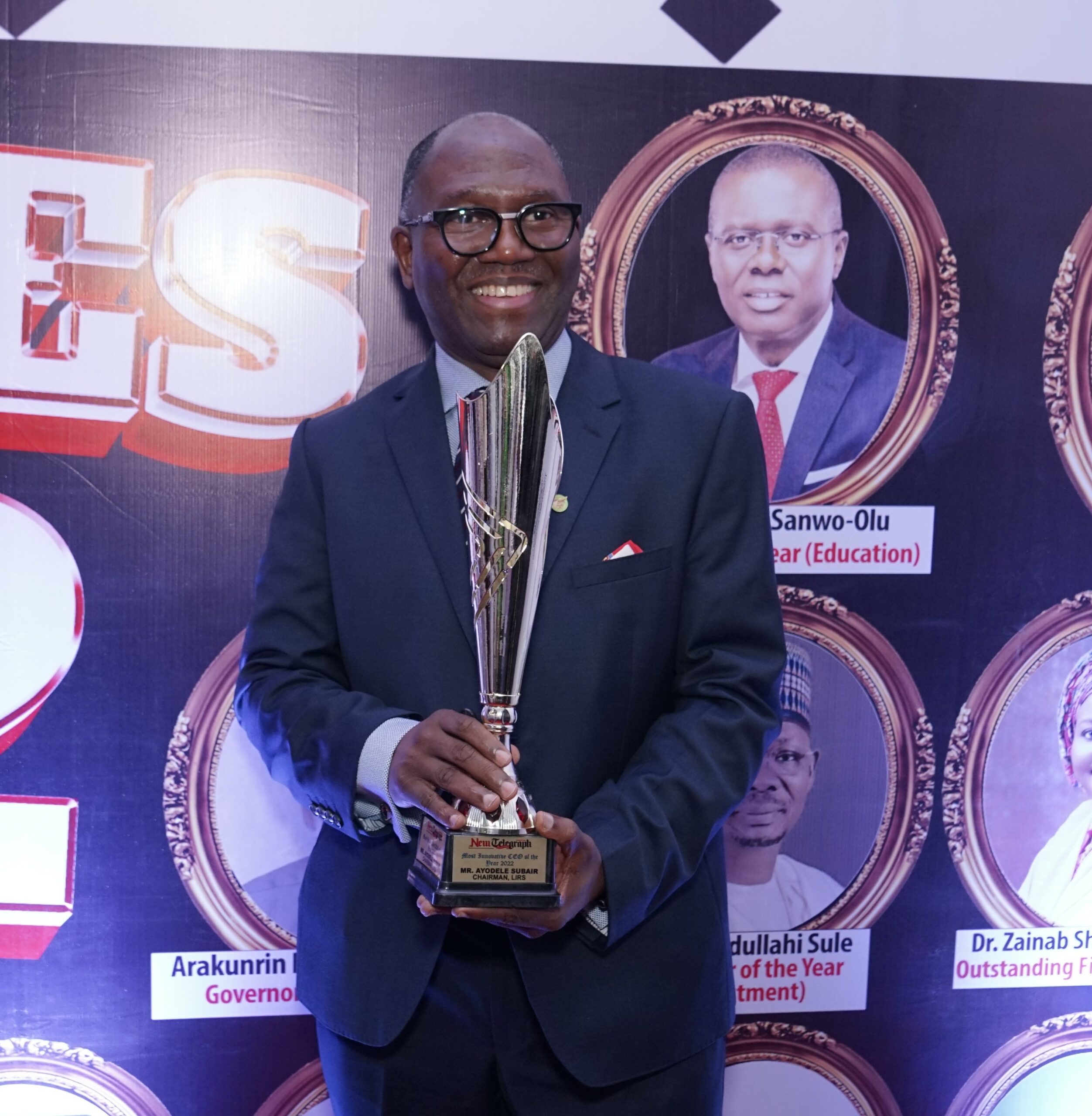 LIRS Boss– The Executive Chairman of the Lagos State Internal Revenue Service (LIRS), Mr Ayodele Subair has been conferred with the Most Innovative CEO of The Year Award 2022 by the New Telegraph Awards 2022.

The award ceremony, held at the Balmoral Convention Centre, Federal Palace Hotel, Lagos, on Friday, had in attendance several other awardees and dignitaries, including the Vice President, Prof. Yemi Osinbajo, honoured with the Statesman of the Year Award, All Progress Congress Presidential Flagbearer, Asiwaju Bola Tinubu, PDP Presidential Candidate, Alhaji Atiku Abubakar, who both bagged Lifetime Achievement Award and Lagos State Governor, Babajide Sanwo-Olu, who went home with the Governor of the Year (Education), among others.

The organisers of the awards, The New Telegraph Newspapers, explained that Subair was honoured for his landmark strides since he became the LIRS Executive Chairman in 2016, as he has been able to implement strategic innovations as well as double the initial revenue generation from N240bn to N427bn with his astute knowledge and experience in Accounting and Taxation.

Driving the tax revolution at the LIRS, other Subair’s achievements, according to the newspaper, include the introduction of eTax in 2019, the launching of the whistleblowing initiative (2022), staff reforms and welfare upgrade (from 2017 till date), the introduction of the IBILE HUB Initiative (2021), Technology driven Operational Reforms in LIRS formed in 2022.

Where an Intelligent Unit- is a team of undercover administration specially trained in information gathering and intelligence reports to provide information on all taxpayers in Lagos State and to ensure the agency has adequate information for appropriate profiling to expose tax defaulters.

Others include the establishment of the LIRS Service Charter (2021), the introduction of Automation of collection of consumption taxes (2017-2018), the inauguration of the Joint State Revenue Committee (JSRC) in 2021 as well as becoming the agency with the Highest Generated Revenue amid Covid-19 pandemic in 2020.

While receiving the award, the LIRS boss, who was accompanied by some of the agency’s directors, expressed gratitude to the management of New Telegraph for recognising LIRS for the efforts it has been making in driving the State’s revenue generation under Governor Babajide Sanwo-Olu-led administration.

Subair said: “I want to say a very big thank you to the organizers of this great award, including the publisher and management of New Telegraph. “I want to say thank you for recognizing LIRS as being the most innovative and very strategic agency. We know we have to be on top of our game so that we can generate enough revenue for this wonderful state.”

Speaking further, the astute Tax administrator noted: “I am very happy to receive this award. It is the recognition of all the hard work we’ve been doing at the LIRS. This award encourages us to strive to improve our innovation. The LIRS is hinged on technology, and anybody who wants to make any headway in tax administration has to embrace technology. So, it’s our joy that we are being duly recognized as the foremost agency in that direction.

“I dedicate this award to my late father, Engr. Abiodun Subair, Governor of Lagos State, Mr Babajide Sanwo-Olu, always says yes to our wish list. I also want to dedicate the award to my family, to all directors and management staff of LIRS who are here to support me tonight and very importantly, to all staff of LIRS that have stayed committed to our strategic objectives.”

Speaking on what to expect from the agency shortly, Subair noted; “As for me, when you talk about figures, I want to ensure that we continue to double our numbers so that we have enough funding to sustain the development of our dear State.