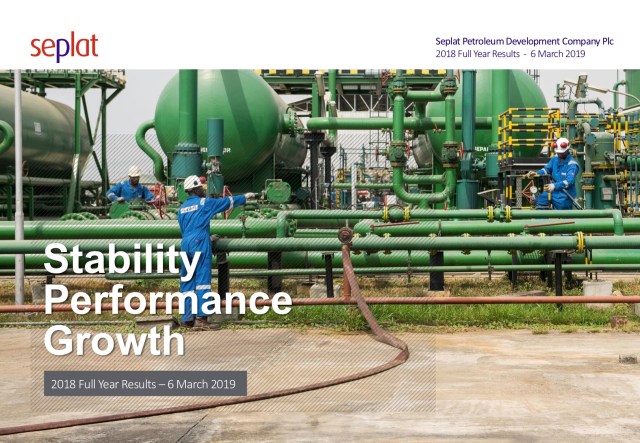 BrandNewsDay reports that an Ikeja High Court of Lagos State has ordered one of the foremost oil and gas exploration companies in Nigeria, Seplat Petroleum Development Company Plc, to pay an outstanding indebtedness of $2,112,500 million USD, an equivalent of  N1,499,875,000 billion (One billion four hundred and ninety-nine million), to an oil servicing company, ABM Global Resources Limited.

Justice Owolabi Alls Dabiri who presided over the court, made the order while delivering judgement in a debt recovery suit instituted by ABM Resources Limited against Seplat Petroleum Development Company Plc in a suit numbered LD/2457GCMW/2016.

ABM Resources Limited in a bid to recover its money from the judgment debtor, SEPLAT Petroleum Development Company Plc for materials supplied to the oil prospecting company, in 2016 through the company’s lawyer, Mr Ade Oyebanji (SAN), instituted a debt recovery suit at the Lagos State High Court Ikeja.

The claimant, ABM Resources Limited in its an amended statement of claim dated November 23, 2020, and filed by its lawyer, Mr Oyebanji (SAN), stated that sometime between 2012 and 2014, Seplat Petroleum Development Company Plc secured its service to supply 9-5/8 N80 VAM Top Casing Pipes and 2-7/8 N80 HCS Tubing, within the space of three years. Adding that it supplied the defendant (Seplat) with all the numbers of 2-7/8 N80 HCS Tubing Pipes which were received by the defendant.

The claimant further averred that in fulfilment of the terms of the contract for the supply of the materials and in adherence to the purchase order of the defendant, it made several supplies. And in fulfilling part of its obligations in accordance with the contract term,  SEPLAT made an upfront payment of $3,640 million USD, being 80 percent of the total cost of the 50,000 feet of 9-5/8 N80 VAM Top Casing Pipes supplied leaving a balance sum of $910,000.00 and $227,500.00 as Value Added Tax totalling $1,137,500 million USD.

The oil servicing firm said it supplied the products requested by the defendant satisfactorily through its PO number 013537 and the defendant issued a Work Completion Certificate for the job. It adds that it issued invoice number ABM /MD/SEPLAT/14/Vol. 4/892 dated November 17, 2014, to the defendant in respect of the balance sum of $1,137,500 million USD, due on the supply, but the defendant has refused and failed to settle the outstanding invoice.

Consequently, the plaintiff is claiming from the defendant the sum of $1, 137, 500 million USD and another $ 975, 000. USD, being the cost of the unpaid materials supplied to the defendant.

However, during the trial, both parties call one witness each and tendered documentary evidence in support of their case.

While the claimant call it the only witness, Chioma Kelechukwu, a Business Development Officer, in its firm, identified her statement on Oath and was later cross-examined by the defence counsel.

The defendant also called its lone witness, Igbi Oghenerume, the Lead Inventory Manager in its firm, who also identify his statement on Oath and was cross-examined by the claimant’s counsel, Oyebanji (SAN).

During cross-examination, the claimant’s witness told the court that she was aware of the defendant’s indebtedness to the employer and that she was part of the meeting on September 16, 2016, where the issue was tabled and discussed by the parties, adding that she did not accept the claim of a shortfall of 17,842.02 feet of pipes as alleged by the defendant.

Chioma, in her testimony, admitted that she was aware of a shortfall of 10, 000 feet of pipes in 2012, but added that the shortfall was a different transaction from the current claim of the claimant, adding that the current claim was in respect of goods supplied in 2014.

On the part of the defence witness, who identified several purchase orders and emails of his company, he admitted that the defendant was not denying owing the claimant, but denied knowing to what extent.

Justice Dabiri while legally evaluating the documentary evidence placed before the court and counsel submissions, said that by the defence’s own documents and oral testimony there was no dispute that the defendant issued a Work Completion Certificate to the claimant after delivery of materials which pre-supposes the satisfactory completion of certain job or activities.

The trial judge added that the sanctity of a contract or agreement is to ensure that a party who voluntarily entered into a contract is bound by it, no matter how unfavourable it may turn out to be as long as he entered into the contract fully conscious of what he was doing and had willingly signed same and the subject matter of the contract is lawful.

The judge added that, to say the least, there were no sufficient materials placed before the court to prove that there was any shortfall in the supply.

What the judge said;

“The court was not furnished with any official report detailing the shortage, rather an internal memo was tendered before the court, communication between departments within the same organisation.

“The defendant could have been more circumspect and more discerning to invite the claimant for the verification and both parties to acknowledge, consent or reject, but this is a one-man show considering the colossal amount involved.”

“I have listened to the submissions of counsel on both sides, and having perused the array of processes and documents before me, the court hereby makes the following orders and this is the judgement of the court.

“That the sum of $1,137,500 million USD is the sum due to the claimant from the outstanding balance of the defendant for the supply of 9-5 N80 VAM Top Casing Pipe and 9-5N80 HCS Tubing Pipe.

Justice Dabiri also awarded N500,000 in favour of the claimant.

Concluding, Justice Dabiri said: “It is unfortunate that in a country where the business environment is already harsh, unfriendly and riddles with stings of bottlenecks primed to make business owners fail, companies and individuals also constitute hindrances to the smooth running of the business by refusing and neglecting to make remittance for services rendered. Such attitude should be condemned in its entirety. Truly this is a simple case of a contract, a business gone awry,” he said.

Meanwhile, the defendant has appealed the judgement of the Ikeja High Court.

According to the Notice of Appeal dated December 13, 2021, and filed by the legal firm of Olaniwun Ajayi LP, the appellant in the notice of appeal raised ten grounds for adjudication.

However, no date has been fixed for the hearing of the appeal.