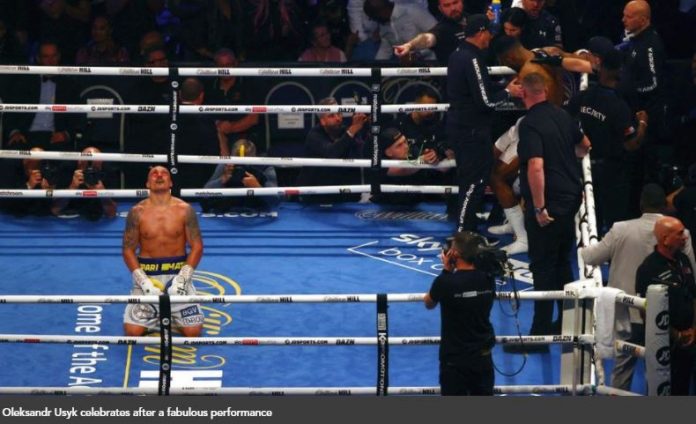 Oleksandr Usyk has defeated one of the world heavyweight champions, Anthony Joshua, otherwise known as AJ, on Saturday.

Brand News Day Nigeria reports that the former cruiserweight Ukrainian conceded height, reach and power advantages to Joshua, but defied them all as his ring craft, speed of movement and relentless work rate earned a deserved win.

Joshua was behind from the first round and while that had been expected by many, the bigger man was never really able to assert and land the blows required to either earn a late stoppage or turn the tide on the cards.

Only from round 10 did the fight really begin to open up but so too did Joshua’s right eye and as time ran out, Usyk continued to prove out of reach, landing more quick combinations in the 11th as Joshua’s forlorn search continued.

It was now clear that only a knockout would do for the British fighter but it was Usyk who finished the stronger, again finding the target with the straight left and piling on the pressure, threatening to force a stoppage himself with a late barrage.

Come to the final bell, two things appeared certain: Usyk had won a clear and unanimous decision, and the rematch clause would be activated.

READ >>  Anthony Joshua Welcomes Mike Tyson Return To Boxing, Speaks On What To Do

“This means a lot,” said the new unified champion, speaking to Sky Sports via a translator. “The fight went exactly the way I expected it to go. There were a couple of moments that Anthony pushed me hard, but nothing special.

As for a rematch, he added: “I’ve been working so hard in preparation for this fight. I miss my children, I miss watching them play. I want to go home, I want to be with my family. I’m not thinking about the rematch at the moment.”