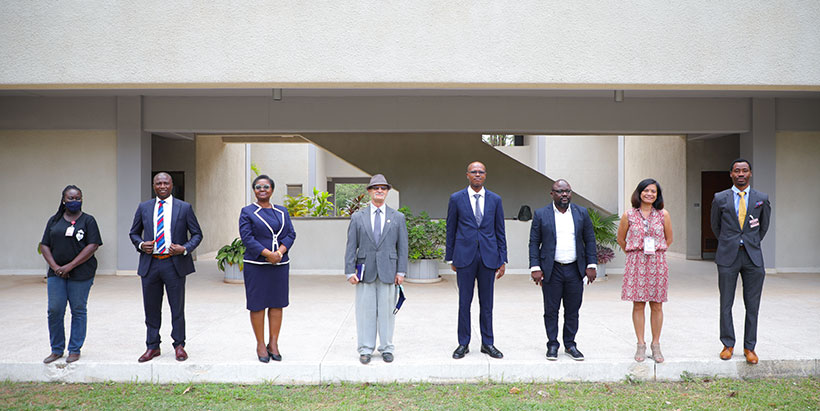 In preparation for the upcoming Ecobank Agribusiness Summit on “Digitizing the Agricultural value chain for unlocking productivity, growth and food security”, a six-member delegation from Ecobank Nigeria and Vanguard Media, publishers of Vanguard, paid a visit to IITA to formally introduce the group and seek collaboration opportunities on potential strategic initiatives.

The team led by Oguntoyinbo Mojisola, Executive Head, Public Sector and Agribusiness, Ecobank Nigeria was received by Kenton Dashiell, Deputy Director-General, Partnerships for Delivery, who gave an overview of IITA’s activities and achievements over the past 53 years while highlighting the importance of partnership with organizations that seek to improve agriculture.

“IITA’s mission is to transform African agriculture, and we can achieve this through partnerships. One major partner that would play a major role is the media as accurate, truthful, and honest information can be disseminated through the media,” Dashiell said.

According to Jude Ndu, Director, The Economic Forum Series®, Vanguard Conferences/Enterprise Solutions, the purpose of the visit was to officially invite a keynote speaker from IITA for the Ecobank Agribusiness Summit. “We would like to feature IITA in the upcoming Agribusiness summit. Beyond that, we would like to explore the opportunity to deepen our relationship with IITA,” he said.

Olusola Christopher, Regional Head, Southwest/Midwest, Ecobank Nigeria, stated that there are commonalities in the vision of IITA and Ecobank in transforming lives in Africa. “Ecobank is strategically placed to partner with IITA to achieve the vision that both institutions represent as we empower the continent economically and integrate the continent financially,” he said.

The summit, which is the second series, will bring together key players in the agricultural value chain to examine technology’s role in improving productivity and enhancing and empowering small-scale farmers.

A tour of the facility, which included the IITA Youth Agripreneurs (IYA) and Business Incubation Platform (BIP), was conducted to showcase IITA’s program in transforming agriculture in Africa.