How to Use TikTok Playlists Feature

The Top 5 Things You Should Never Do At Work 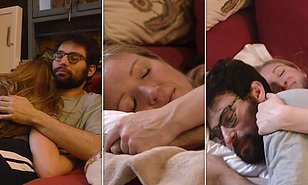 A married woman has revealed that she spends $80 an hour to visit a professional cuddler. Saskia Larsen, from New York, says her husband doesn’t mind that she meets up with another man just to spoon, and is ’99 per cent sure’ he doesn’t get jealous. The actress uses a service called Cuddlist and hires people while she is away from home to pursue her acting career.

Speaking to the Instagram page, Love Don’t Judge, Saskia explained: ‘Many people would think that it’s odd that I access cuddling services because I’m married. ‘But screw it, I don’t really care what anybody else thinks. I love affection and I love how it makes my body feel.’ Speaking about her husband she added: ‘I’m 99 per cent sure he does not get jealous of cuddling because I check in with him, and talk to him about it.

‘He’s more protective of me than jealous so as long as I’m safe it’s good.’ Her husband Arthur added: ‘Saskia and I have a monogamous relationship but I don’t feel like cuddling violates the integrity of that.

‘Saskia likes a lot of contacts and she’s very comfortable around other people and she’s very affectionate. ‘When we’re together we cuddle all the time so I can understand why she would need that human contact.’ The cuddler himself says the business has ‘never done better’ and he gets 200 requests a week for his services. He said: ‘I have all kinds of clients that are all kinds of ages.