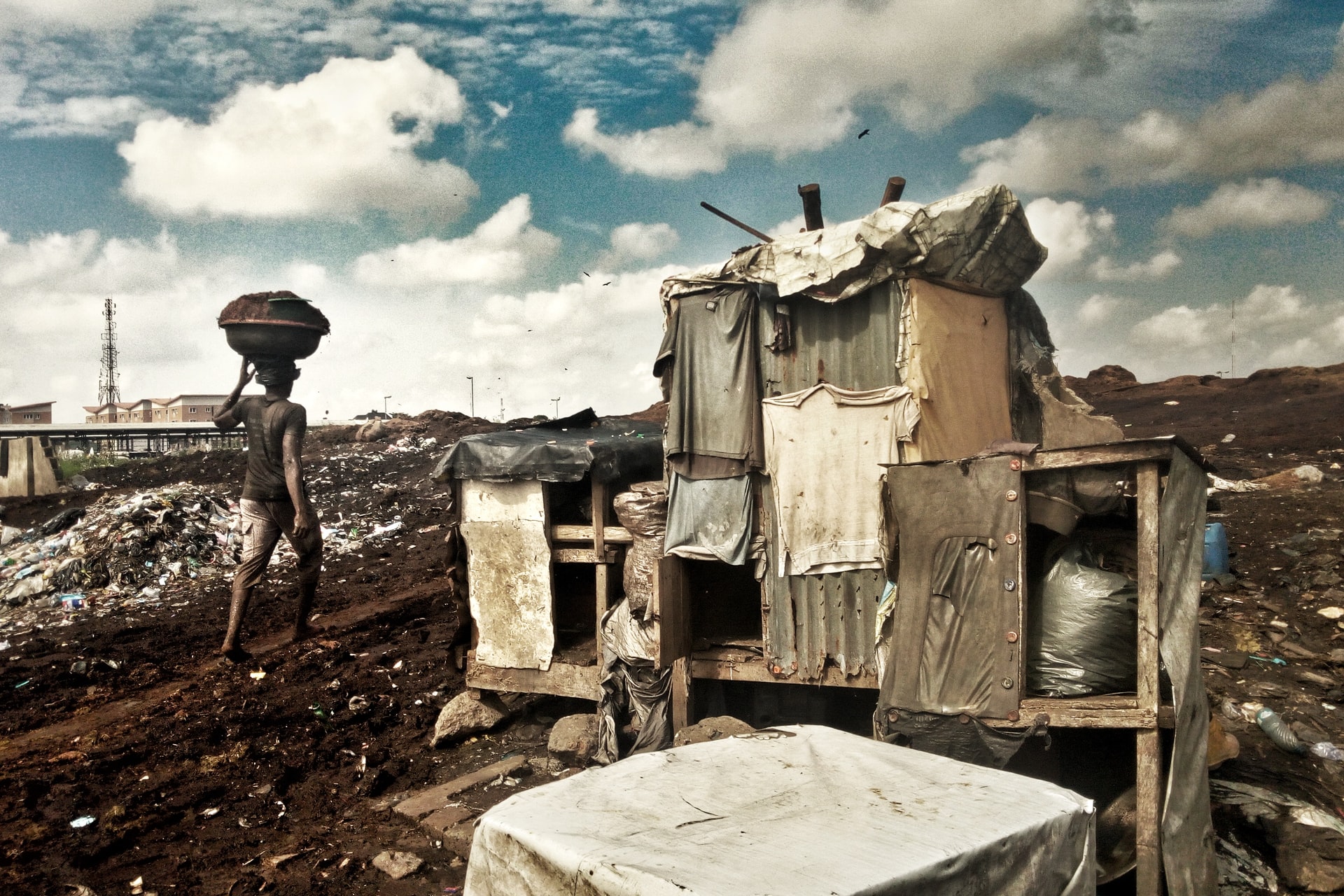 Nigeria aspires to lift 100 million people out of poverty by 2030. Prior to the COVID-19 crisis, around 4 in 10 Nigerians were living in extreme poverty, based purely on a monetary measure. Using the same population estimates as the 2018/19 Nigeria Living Standards Survey, this means that more than 80 million Nigerians were living in poverty before the pandemic, even without data from Borno state where the survey could not be fully carried out.

However, projections suggest that the combined effects of the COVID-19 crisis and natural population growth could leave 100 million people living below the national poverty line by 2022, rationalizing the government’s ambitious poverty reduction aspirations. Since Nigeria is home to the largest number of poor people in Sub-Saharan Africa—the world’s poorest region—lifting Nigerians out of poverty is vital for “moving the needle” and reducing global poverty.

Lagos, Nigeria
A man carrying a head pan next to a makeshift Locker.
Photo by Rémy Ajenifuja

Yet poverty is increasingly being understood as a multidimensional phenomenon. Even households who are not monetarily poor may still be unable to send their children to school or may have members who are malnourished. In participatory studies, poor people themselves say that non-monetary factors—including food security, housing, health, education, and security—matter directly for their wellbeing.

Since not all of these factors can be accessed in the market, measuring monetary income or consumption alone may not be enough. Human capital, housing, and basic infrastructure are also key correlates of monetary poverty.

READ >>  Konga To Employ Over 100,000 Nigerians Through Konga Affiliate Project

Within Nigeria, the distribution of monetary and multidimensional poverty is spatially unequal, so poverty reduction strategies need to be carefully targeted.  Both monetary and multidimensional poverty is largely concentrated in Nigeria’s northern states (Figure 1). Moreover, the north-south gap in terms of education and basic infrastructure does not appear to be closing substantially over time.

Figure 1. Both monetary and multidimensional poverty is concentrated in northern Nigeria

Looking at the relationship between monetary and multidimensional poverty can tell us which policies to emphasize.  Using simple regression techniques, monetary poverty appears to be most strongly associated with lack of access to electricity as well as deprivation in terms of educational enrolment and attainment. For two Nigerians living in households with otherwise similar characteristics, the person without access to electricity would be around 23.8 percentage points more likely to be monetarily poor than those with access.

This suggests that electrification and policies to boost educational enrolment and attainment may be particularly important channels for reducing monetary poverty in Nigeria. Such analysis cannot be given a causal interpretation per se, but it may help to prioritize those policies which offer the largest “bang for the buck” in terms of poverty reduction.

Targeting overlaps in dimensions of poverty

Yet, since many households are deprived across multiple indicators, targeting poverty-reducing policies also relies on knowing how much different dimensions of poverty overlap: the extent of these overlaps varies substantially across Nigeria.  When overlaps are small, different interventions—be they for education, infrastructure, or monetary consumption—need different targeting strategies.

However, when overlaps are large, different interventions can target essentially the same households. Indeed, in some countries, conditional cash transfer policies—such as Prospera in Mexico or Bolsa Família in Brazil—explicitly try to address multiple dimensions of poverty for the same households at the same time.

In Nigeria, the largest overlaps between monetary and non-monetary poverty arise in northern Nigeria (Figure 2), as well as in rural areas. This echoes the global finding that different dimensions of poverty overlap more in poorer regions, and especially in Sub-Saharan Africa.

Figure 2. The overlaps between different dimensions of poverty are larger in northern Nigeria

Nevertheless, even if we know which policies to prioritize and in which communities, conflict, climate shocks, and COVID-19 need to be carefully considered to successfully reduce poverty in Nigeria. Firstly, implementing interventions to reduce poverty is difficult when violence looms: this is especially challenging in the northeast of Nigeria, although conflict events occur across all of Nigeria’s zones.

Secondly, shocks could reverse hard-earned gains. Around one-quarter of Nigeria’s population is classified as “vulnerable”—having consumption levels between 1 and 1.5 times the national poverty line—but social protection is extremely rare. Indeed, around 1 in 5 Nigerians experienced a climate-related shock in the three years prior to 2018/19, so policies that seek to build resilience will also be vital.

Thirdly, through its effects on health, jobs, and income, but also schooling and investment in basic infrastructure, COVID-19 threatens to deepen both monetary and non-monetary poverty in Nigeria, underlining the importance of having tailored, granular policies to respond to the crisis and build back better.