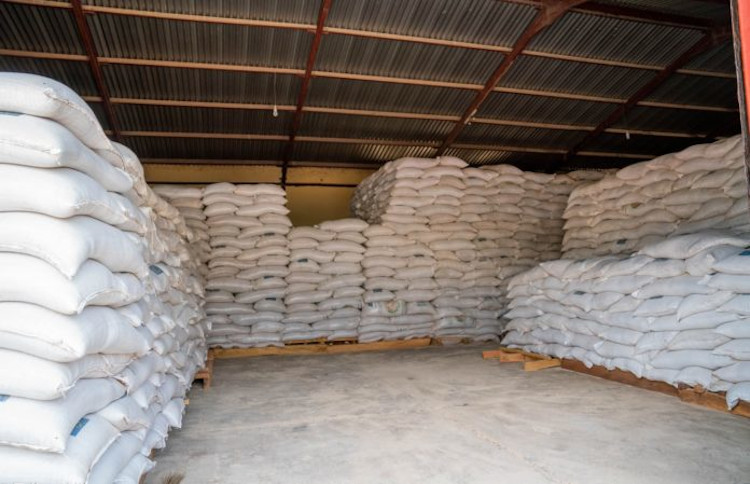 Sadiyah Umar Farouq, Honourable Minister of Humanitarian Affairs Disaster Management and Social Development and her team have received a total of 3.999 tons of food grains donated to the Federal Government by ECOWAS.

The donation is to assist most vulnerable households in Nigeria. The grains are meant to alleviate the impact of the COVID-19 on such households.

During the handover of the food grains at the ECOWAS/ FMARD Grain Depot in Hotoro Kano on Saturday 22nd August 2020 the Minister thanked the ECOWAS Commission for the kind gesture stating that ”the provision of humanitarian assistance for distribution to the vulnerable population is a timely and generous act”. She noted that the grains would go a long way in cushioning the effect of COVID-19 on vulnerable citizens.

While speaking at the handing over ceremony the Minister said the Ministry had responded to the COVID 19 pandemic by ensuring various forms of palliatives were given to the poor and vulnerable across the 36 States and the FCT as directed by President Muhammadu Buhari. She added that about 70,000 metric tons of grains consisting of maize, sorghum, and millet as well as trailer loads of rice and vegetable oil were among the palliatives distributed.

Farouq said: “At the commencement of the COVID 19 Pandemic the National Social Register (NSR) had 2.5 million poor and vulnerable Households with over 11 million individuals in 34 States and the FCT.

”As at today, 3.7 million households with over 15.5 million individuals in all 36 States and the FCT are in the Register. The expanded register will ensure that the food items provided by the ECOWAS Commission reaches the most vulnerable it is meant for and work toward mitigating the risk of food security at this critical time.”

The Commissioner of Agriculture, Environment and Water Resources – ECOWAS Mr Sangare Sekou conveyed the warm greetings of the President of ECOWAS HE, Dr Jean-Claude Kassi Brou to HE President Muhammadu Buhari, the government and people of Nigeria for the constant support and facilities provided ECOWAS.

He paid tribute to the leadership of President Muhammadu Buhari that earned him the “champion of the fight against Coronavirus by his peers.“

Sekou further said: “the donation is with the objective of saving the maximum lives in West Africa. Saving lives also means giving food to people affected not only by the Coronavirus but also for our brothers and sisters, our parents affected by terrorism, vandalism, violent conflicts and climate change”.

Speaking further, he disclosed that it is not an option to remain without taking action. Stressing that the event, “confirms the breathing of the regional solidarity mechanism represented by the Regional Food Security Reserve and strengthens us in commitment to ECOWAS, to the countries and to the populations”.

On his part, the Minister of State Federal Ministry of Agriculture and Rural Development said that in order to address the food crisis in the West African sub-region, Heads of Government of Member States decided to set up a Regional Food Security Reserve Programme that can be used for interventions in case of emergencies and boost food security.