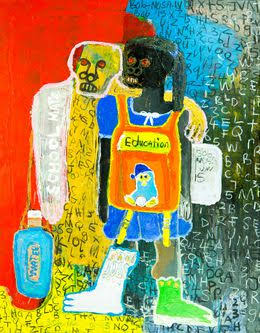 Nigerian-born Bob-Nosa Uwagboe is a protest artist of international repute whose works have been exhibited in major countries of the world. In this interview, the artist sheds light on his artistic career which focuses on social injustice and giving voice to the voiceless. He also spoke about his upcoming exhibitions in Barcelona Spain:

Could you recap your profile for those who may be meeting you for the first time?

I am Bob-Nosa Uwagboe. I was born in Benin, Nigeria in 1974 and raised in the rich cultural tradition and artistic heritage of the Benin Kingdom, most widely known for its famous bronzes. This taught me the importance of art in society and its ability to articulate culture. I graduated from Auchi Polytechnic in Edo State, with a specialization in painting. Auchi Polytechnic is considered a famous colourist school, and my artworks adopt a bold use of colour to convey a heavy emotional charge.

Since graduation, I have worked as a full-time studio artist within my “Protest Art Studio”.

Why the term, ‘Protest Studio’?

It describes the activities of my practice which is using Art as a cultural tool for social change, most especially, in a society like ours which is undergoing a process of failure in leadership and monumental decay.

Tell us some of the issues you explore in your works?

My artwork exposes problems plaguing Nigerian society, from poor leadership and government corruption to violence, theft, election rigging, and human trafficking. I see art as a tool to raise pertinent issues in the public discourse, to begin the cycle that will incite social change.

My artwork is a fundamentally raw political critique of the ruling class. The common man has been forgotten by the government, the elite accumulating wealth while the common man has no food to eat. I use my art as a form of activism and a call to action.

What kind of materials do you work with and how would you describe your paintings?

As a painter, I use a variety of materials including acrylic, spray paint, crayon, charcoal and oils. I also incorporate materials found in popular culture, including clothes, sacks, ropes, paper, artificial hair, sand and archival images. My paintings oscillate between the abstract and the representational, with figures formed through basic, elemental forms that act as ambiguous and ghostly presences.

What are the dominant themes in your works?

The poor leadership in Africa and the high level of inhumanity that have become the norm is my primary interest in art. My subjects are the provocative characters in the Nigerian social sphere. The figures in my paintings include police officers, government officials, businessmen and criminals who through their actions wreak havoc on the citizenry. In my paintings, drunken policemen are depicted with liquor in one hand, guns in the other. Human merchants carry their innocuous victims, mainly children on their backs while the politicians sexually molest defenceless women.

In other words, you use satirical imagery. The paintings are caricatures of certain people in the society?

Yes. The figures are formed as a kind of caricature, which come across as looking animalistic and barbaric. This is reflective of the inhumanity that their actions embody. There is even one that portrays a wealthy man hiding behind his armed bodyguard.

What’s your primary source of inspiration?

The city of Lagos is a continual source of inspiration in my work. As a city of over twenty million people, the average citizen is caught amidst unprecedented change. With rapid development, economic gaps and a lack of basic infrastructure, the average Nigerian carries on through the daily hustle and chaos of the city. At the same time, they find continuous obstacles along the way from political to economic falsehoods.

What project do you have at hand now?

I’m working on a project titled “Police Brutality”. At the moment, I have two exhibitions coming soon in Barcelona Spain with OutofAfrica Gallery. The solo exhibition, titled “Police Brutality”, is scheduled for September 15 to October 24, 2021. I will also be representing the Out of Africa Gallery in Barcelona Gallery Weekend in September 2021. So, I will be travelling soon to Spain for this reason.

What is the purpose of the planned exhibition?

The exhibitions for 2021 are to show works that condemn the inhumane nature of most of our uniformed men across the world. I will also be showing works from this body of works in Cameroon by November. The title of that show is “Inhumanity”.

READ >>  The Funeral Of The Person Hindering Your Growth

How do you connect with your target audience?

I evoke emotions with my art by employing diverse materials seemingly unconnected at first, but often succeeding in challenging the audience to deeper engagement with varied interpretations and reflections mostly concerned with issues such as falsehood, deception and bad leadership. I interpret these through art either offensively or defensively. My art is puzzling, magical and consuming.

I don’t pre-destine my art processes because doing so might circumscribe my creative effort and jeopardize creativity. My creative process includes moments of calmness, anger, pain and passion. I employ diverse materials such as used fabric, hairs, sand, papers, sack, rope, acrylic, spray paint, crayon, charcoal and oil paint on canvas or board. The process is often therapeutic and emotive; a moment of total surrender to my willpower. It opens up my soul as a channel where good ideas pass through.

Fortune seems to be smiling on you now as an internationally exhibiting artist. What was the beginning like?

The beginning was tough and full of rejections. But I wasn’t discouraged because I was aware of the battle ahead before I embarked on the journey. So, I was well prepared.

What is your advice to other talented artists who are yet to break even?

Well, my advice for every artist who wants to enjoy art practice is that the person must do so with the full understanding of what his or her purpose on earth is. There is a need for patience, contentment, sincerity. The artist must be creative, innovative, humble, calm, open-minded and willing to add value to humanity. These are some of the principles he or she must uphold to govern his or her path. Fame and money shouldn’t be the motivating factors.

In an interview held with the Vanguard.